The purpose of this award is to recognise an outstanding teacher of secondary English in NSW who has a demonstrated commitment to excellence in teaching and learning in subject English. 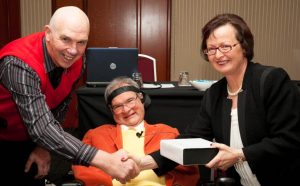 As all would be well aware, sadly there is a close correlation in poorer results in external tests for students the further they are located from the ‘centre’. Indeed the gap between those who are located in rural and remote areas compared to those from urban areas has widened in recent years. Finley is a small township of 2000 and the school supports a number of smaller surrounding townships and farming communities. For the best part of ten years from the turn of the century till late 2009 the area was in the grip of one of the worst ever droughts in the county’s history, and this combined with ongoing uncertainty surrounding water supply for irrigated farming led to a substantial fall in school enrolments and a loss of employment opportunities in the communities.

It is within this context that the achievements of Veronica, who has been the HT English at Finley High School since 2007, take on even greater meaning. In that time not only have her own classes had very significant success but indeed her faculty has enjoyed regular, ongoing above state average results in the HSC. Every year since 2006 Veronica has had students in Band 6 in Advanced English and has also had very significant success in Extension English.

Veronica has a great passion for all things surrounding English, and in addition has actively promoted spelling and reading competitions, as well as another of her loves, public speaking. She has run workshops on creative writing and is currently undertaking additional work on grammar and the new Australian curriculum.

She has earned a reputation of setting very high standards, and expecting her students to work hard. They know she is a teacher of outstanding quality. Over many years she has demonstrated her willingness to give up countless hours of her own time to support and assist her students and to help them develop their skills and knowledge. There is a genuine affection between Veronica and her students and because of the quality of these relationships it is not all surprising that her students have had such significant successes.

Veronica McNaught is a most worthy recipient of the Paul Brock Award.

Back to News index